I’ve been trying to improve the performance of my wireless network at home. This is one of the tools in my troubleshooting toolbox. 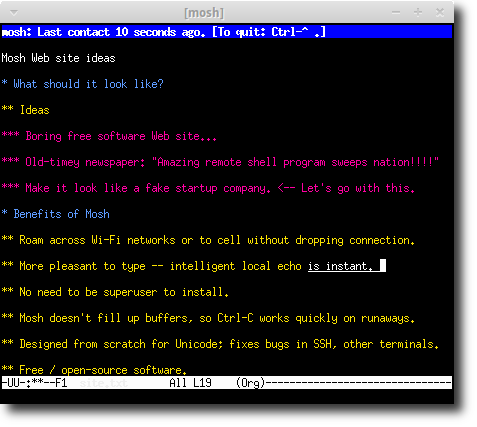 Mosh is a replacement for SSH. It’s more robust and responsive, especially over Wi-Fi, cellular, and long-distance links.

The pfSense project is a free network firewall distribution, based on the
FreeBSD operating system with a custom kernel and including third party free
software packages for additional functionality. Through this package system
pfSense software is able to provide most of the functionality of common
commercial firewalls, and many times more.

pfSense software includes a web interface for the configuration of all included
components. Knowledge of FreeBSD is absolutely not necessary. Unlike some
similar GNU/Linux-based firewall distributions, there is no need for any UNIX
knowledge, no need to use the command line for anything, and no need to ever
manually edit any rule sets. In fact, the majority of pfSense users have never
installed or used a stock FreeBSD system. Users familiar with commercial
firewalls catch on to the web interface quickly, though there can be a learning
curve for users not familiar with commercial-grade firewalls.

zerorpc is a flexible RPC implementation based on zeromq and messagepack.
Service APIs exposed with zerorpc are called “zeroservices”.

zerorpc can be used programmatically or from the command-line. It comes with a
convenient script, “zerorpc”, allowing to: